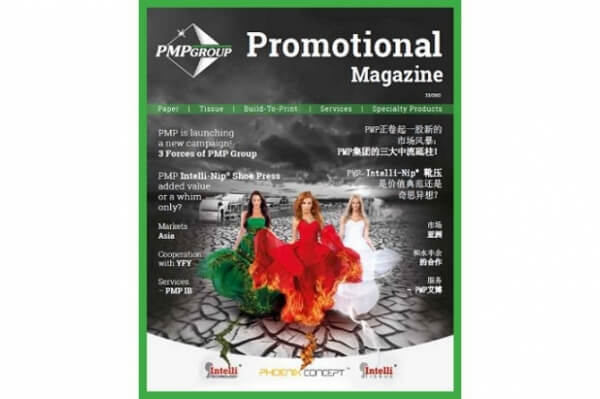 PMP Group has been supporting one of the leading Asian papermakers – Yuen Foong Yu Corporation – for the last six years (within the tissue business). After designing seven tissue machines for three facilities located in China, both companies have reached a higher level of cooperation.

On January 1st 2014, PM#5 and PM#6, which are running in the YFY’s Yangzhou (China) facility, have achieved an impressive capacity increase. PMP Intelli-Tissue 1500® machines, with a maximum operating speed of 1,600 mpm, were brought on stream in the summer of 2012. Both machines were designed to produce 75 tpd each. However, thanks to the machines parameter optimization it was possible to enhance the capacity up to 96.7 tpd on PM#5 and 84.3 tpd on PM#6. Reaching the speed record of 1700 mpm and enhancing the daily capacity up to 17% (in total) - with basis weight at wire of 14.1 gsm on one and 12.3 gsm on the other. Improved parameters were able to be obtained due to YFY’s exceptional experience in the field of tissue production, as well as its detailed knowledge of PMP’s machines. PMP Intelli-Tissue 1500® line is especially popular among tissue makers thanks to being an economical solution, which is a unique combination of simplicity and technology.

Back in 2012, Mr. Ming-Fa Tang, the YFY Deputy General Manager Engineering & Technology said that it was the fastest assembly and start-up in the history of the YFY Corporation. It means that YFY’s PM#5 and PM#6 were not only the fastest in installation, they are now one of the fastest machines in the company’s entire fleet. At present, the two companies are in the middle of an execution phase for the following (4) PMP Intelli-Tissue 1500® machines for the Yangzhou and Dingfung tissue mills. Both YFY and PMP Group are eager to raise the bar on those projects after achieving exceptional results on PM#5 and PM#6.