The new issue of the PMP Promotional Magazine has just been released. After careful consideration, we have decided to change the layout of our magazine, as well as its basis of merit. The main aim of the new design is to make the publication more rea 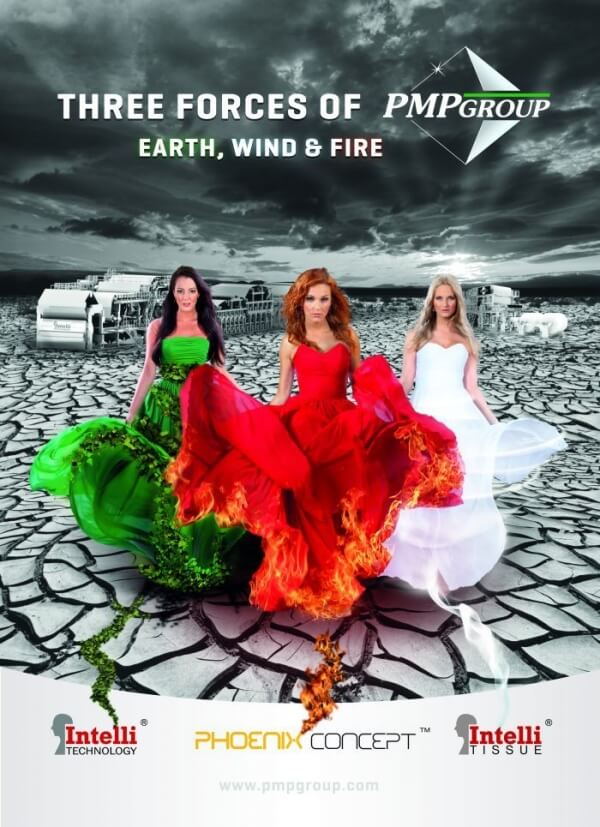 Forces of Nature. Primal elements that have always been associated with power, strength and vitality. Their metaphorical properties have become an inspiration for PMP Group to start a new campaign which symbolizes the benefits of the company’s three major, technological lines. Stable as the Earth itself, delicate as the Wind and energetic as Fire - Three Forces of PMP Group.

Earth. The soil, that gives life to all living creatures. The very base for creating and maintaining existence. Associated with growth and solidity, often evokes the feeling of security. Even our own planet bares its name. For PMP Group, Earth is a perfect symbol of its Intelli-Technology® line – a Platform Concept for Papermakers. Reliability, strength, evolution, ecology. Nouns that describe both the force and technological concept. For years now, PMP Group has been devoting its efforts to develop a platform that would be reliable, ecological and cost-effective. Now, after years of technological progress, PMP’s Intelli-Technology® line reflects all benefits that are associated with one of the most powerful Forces of Nature – Earth. Purity, gentleness and lightness.

Second of PMP Group’s Forces – Wind, is a perfect reflection of the company’s Intelli-Tissue® line - Platform Concept for Tissue Makers. Tissue products, provided by PMP Group’s machines, just as the Wind itself, can be associated with the softness of a subtle breeze. Their silky nature however, combined with their strength, can reflect the power of a hurricane. Both delicate and strong. This contradictory Force symbolizes the very nature of the final product. PMP Intelli-Tissue® line is as powerful and delicate as the Wind itself.

Fire. A burning flame of the PMP Phoenix Concept™ rebuilds. Just as a Phoenix rising from the ashes, PMP’s concept will bring a new life to any existing machinery. Fire is considered to be the most powerful of all Forces of Nature. It is dynamic and rapid. It is the fuel for creativity, passion and has always been an essential part for the development of all civilizations. It transforms from one form to another – just as the Phoenix Concept™ transforms a technological line and gives it a new life. For PMP Group, Fire is the link between Earth and Wind. In the technological concept, it refers to both Intelli-Technology® and Intelli-Tissue® line. It connects both Forces of Nature and creates a harmonious symphony of modern technology.

PMP Group’s new campaign is a metaphorical representation of the company’s three major technological lines – Intelli-Technology®, Intelli-Tissue® and Phoenix Concept™ rebuilds. The symbolism behind three Forces of Nature can be reflected in the company’s offer. Through the dusk of everyday business existence, through the maze of far-reaching decisions. We give you PMP Group’s new drive – Earth, Wind & Fire.