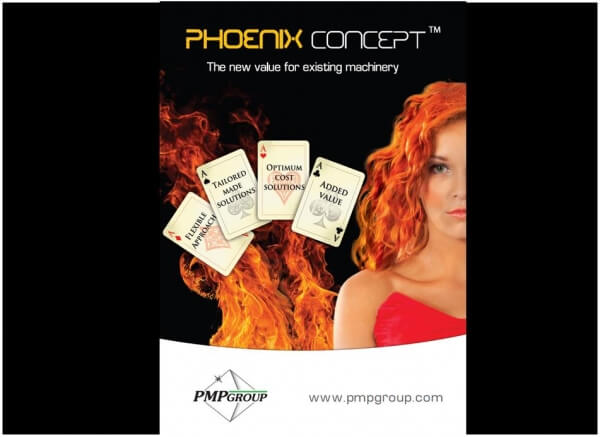 In September 2013, PMP Group has launched a new campaign called 3 Forces of PMP Group – Earth, Wind & Fire. PMP’s new campaign is a metaphorical representation of the company’s three major technological lines – Intelli-Technology® (Earth – stable, ecological, reliable), Intelli-Tissue® (Wind – delicate, soft, clean) and Phoenix Concept™ rebuilds (Fire – energy, power to act, rebirth from the ashes). The symbolism behind three Forces of Nature can be reflected in the company’s offer for the P&P industry. After the first appearance of the campaign, which showed all three elements, the time has come to unveil the second stage that revolves around the element of Fire.

Phoenix Concept™ (Fire) is a line that offers rebuilds on three levels: BASIC (classic type that includes exchanging old sections for new ones), ADVANCED (logistically sophisticated, including PM/TM relocation and a profile change) and PREMIUM (including basic/advanced level and incorporating them with products that are exclusively designed for a particular customer). For PMP Group, Fire is the link between Earth and Wind. In the technological concept, it refers to both Intelli-Technology® and Intelli-Tissue® line.

Due to market requirements and the demand on various machine rebuilds, Fire (Phoenix Concept™ project) is the first out of three PMP marketing campaigns. After publishing an advert and a press release, now the company presents a movie (available here) that describes all three levels of the Phoenix Concept™ project scenarios. In a couple of weeks the company will unveil the following stages of the campaign – concerning the element of Earth and Wind.