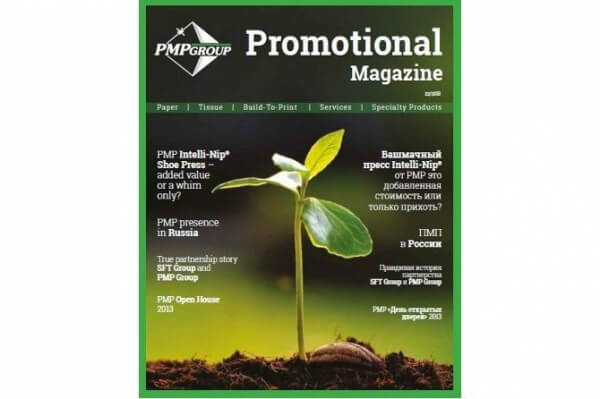 It has been only 12 years since PMP Group started to build its identity as an independent corporation. Although having strong roots, the company was forced to make its own name from the beginning. Thus, despite long tradition and enormous references of Beloit (former PMP Group), today the company made the decision to present only the accomplishments that bear PMP Group's logo.

At present, the corporation is proud to announce its 101st PMP Intelli-Jet V® hydraulic headbox. During only those past 12 years, PMP Group managed to gain over one hundred headbox references around the globe. PMP Intelli-Jet V® hydraulic headboxes can be found nowadays in 15 countries, spread around 3 continents (North America, Asia and Europe). Vast geographical diversity of this specific product, combined with its technological advancement, make the PMP Intelli-Jet V® hydraulic headbox an attractive and desirable product. If we include all types of headboxes, designed and made also by PMP's predecessors since the year 1854, the number grows to 758 headboxes in total. Among paper references there can be found pondsides up to 10000 mm (especially popular in North America) with maximum design speed of 1500 mpm, while in the tissue sector – up to 5600 mm with 2100 mpm design speed. Looking at the product classification, PMP Group's hydraulic headbox references are almost equally divided between paper (51 units) and tissue (50 units) which underlines the company's stable position on the market.

PMP Intelli-Jet V® hydraulic headbox is one of PMP Group's most advanced products and is the key element in both Intelli-Technology® and Intelli-Tissue® platform. A sole confirmation of the products reliability are repeated orders from paper companies – such as Mondi Group, Papierfabrik Niederauer Mühle, Yuen Foong Yu, PT Graha Cemerlang Paper Utama, Jiangsu Changfeng Paper, Zhangjiagang Huaxing Papermaking or Shandong Guihe Xianxing. 101 headboxes is a number which is significant for the company, however, new orders will be executed in the nearest future, therefore the true number is: 101 and still counting.