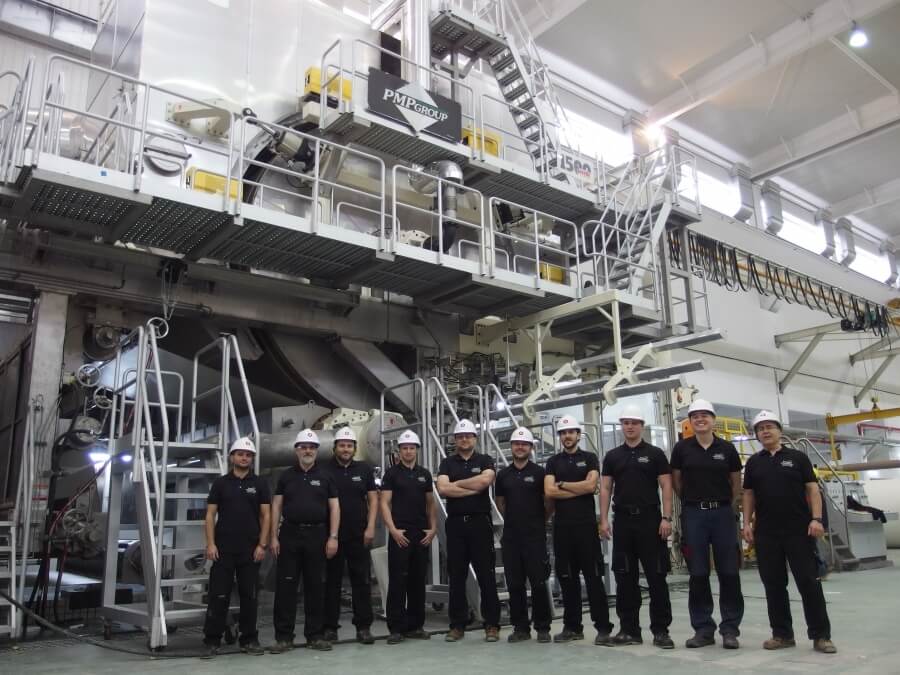 PMP (Paper Machinery Producer) has been supporting one of the leading Asian papermakers – Yuen Foong Yu Corporation for the last 20 years, executing projects both in the tissue and paper field.

At present, in the tissue area, YFY owns 7 PMP Intelli-Tissue® 1600 lines – all are installed in Mainland China: in Beijing, Yangzhou and Dingfung, reaching total capacity of 300 000 t/a. 1st CF Intelli-Tissue® machine (2.4 m wide) was launched in 2008 in Beijing, China. 2nd and 3rd (PM#5 & PM#6) 2.8 m wide CF Intelli-Tissue® were started-up in 2012 in Yangzhou, China. After successful start-ups in Beijing and Yangzhou mills, in spring 2013, PMP has been choosen again to support YFY’s development, this time adding (4) more tissue making lines.

At the end of March 2013, YFY officially announced a massive expansion plan which included investing over 260 mln US dollars in Taiwanese and Chinese plants. At the same time PMP has been awarded a project for (4) new complete CF Intelli-Tissue® 1600 machines.

To optimize the investment, YFY decided to follow the scenario from 2012 (PM#5 & PM#6 Yangzhou project) and clone the same concept for an Integrated Tissue Mill: two tissue machines with rewinders, with a common control room in the same building, as well as a warehouse and converting area.

All recent (4) tissue machines are 2.8 (110 inch) reel trim CF type tissue machines with an operating speed of 1,600 mpm (5,250 fpm) and daily capacity of 80 tpd each. Machines are producing virgin fiber-based tissue in the basis weight range at the reel from 13 to 31.3 gsm (8-19.1 lbs/3000 ft2) for conversion into facial tissue, toilet rolls and kitchen towels. The project goals were premium quality of the final product and significant increase of capacity. In addition, it was important to minimize investment costs. That is why the Integrated Tissue Mill concept was chosen (two TMs under one roof).

This project is the next step of partnership strenghtening between YFY and PMP. Both teams are convinced that common understanding is a great base to stay agile and create a further pro-active development.

„We have decided to continue

since they have good skill

and experience in tissue machines

PMP is proud that YFY sees PMP as a strategic partner. Fruitful partnership, that has been developing over the years between those two companies, has resulted in extremely fast & efficient start-ups and overall, efficient cooperation based on win-win solutions. PMP is looking forward to future projects and is confident that the Intelli-Tissue® technology will help YFY to achieve their market goals and ambitions.

The cooperation between YFY and PMP teams brought common success and both companies look forward to potential projects in the nearest future.

Yuen Foong Yu – one of the leading Asian Corporations with a turnover of 1.8 billion US dollars, ranked in the top 5 among tissue producers in China, was founded in 1925. At present, YFY is active in three business areas: fine paper & board, packaging and consumer products. It owns 23 facilities in China, Taiwan and Vietnam. YFY’s activity within the tissue sector is focused on delivering value for consumers through Mayflower, Tender and Delight brands mainly in China and Taiwan. (learn more: www.yfy.com)